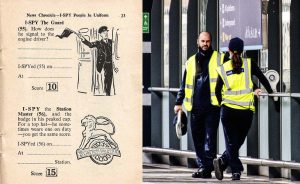 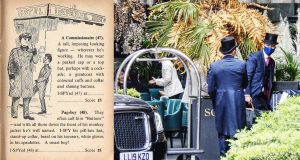 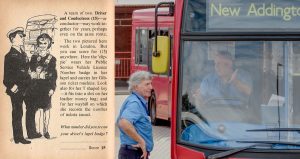 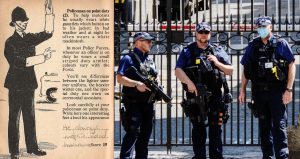 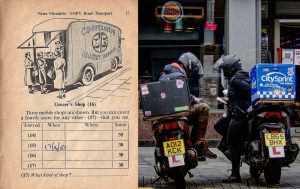 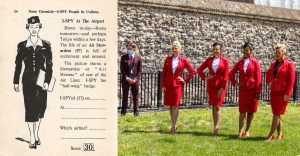 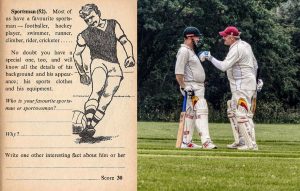 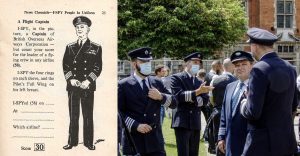 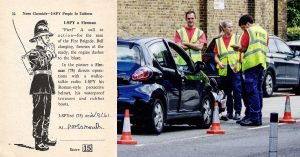 [The introduction is included for information only and may be ignored for the purposes of assessment. It is in addition to the Reflection which follows.]

[16Jun21] This project had its birth (or perhaps its conception) in Exercise 1.3, Typologies where, having photographed armed police and considering how that might expand to sustain a project, I stated, “[t]he notion of creating an I-Spy album of uniformed workers holds no attraction for me” (Blackburn, 2020) only to realise later that it might make quite an interesting project. I bought a copy of I-Spy People in Uniform, published in 1955 (the year after I was born) with the intention of photographing the modern equivalents, or identifying the absence of such equivalents.

There are several interesting and / or useful ways to slice the idea of uniform as it applies to dress. The book comprises three main categories, uniforms of work, uniforms of pastimes and uniforms of belief, but little if any of uniforms of style or identity. Given that the I-Spy series was published for children, it is not surprising that many of its examples relate to children’s activities, mostly youth organisations (scouts, guides and so on), but those groups are not available to me because old men seeking to photograph young children to whom they are not related is nowadays frowned upon (and probably always should have been from the Rev. Dodgson onwards).

It is likely that one of the reasons this project came to appeal to me is because the examples in the book take me back to my childhood: age can incline one towards sentimentality. For the same reason, Barthes’ notion (1980, p.96) that photographs depict (to the viewer) both the past and the future (and that future, for portraits, always culminates in death) is more lucid to me now that when I first read Camera Lucida in my 30s. All the people who created the I-Spy book (none of them are named) are probably dead, as would be most of the adults notionally depicted within it. Dyer (2021, p.116), writing about Peter Mitchell’s Scarecrows project (2015) distinguishes between longer-term history and the pre-existent that does not have to be “dug up and uncovered” but is “there before our eyes” — this history 1955 to 2021 is all within and delineates the boundaries of my personal lifetime.

The uniforms featured in I-Spy have been documented in detail on the development page (Blackburn, 2021a), together with a subset of possible photographic targets from the subsequent volume that extends the quest beyond uniforms, I-Spy People (1963).
I intend to pursue this project after submitting the assignment and so it should be possible to extend the coverage to some of the children’s groups and some adults too at the local Armistice Day ceremony. The notion can be applied to other genres too, I have a copy of the Borenius Forty London statues and public monuments (1926) with photographs by Emil Hoppé, neatly annotated in pencil by a previous owner that I will work on now that public transport has been liberated.

A motif that appeared early in the project was subjects in conversation and this soon reached the point that I was trying to contrive all of my photographs with two similarly-uniformed people in conversation, combined with a surveillance aesthetic by using long lenses at some distance. At the time of writing (19th June), I am aiming for mostly conversing, uniformed pairs, with the exception of my kilted bagpipe busker prospect.

The Reflection section is below and the brief, as usual, instructs us to consider the assessment criteria. I have always found these criteria ill-defined and confusing and all the fellow students I am in contact with agree. A recent email from the OCA Quality Team advised of changes proposed for next year,

I responded positively to the request for feedback and intend to be an early adopter of the new criteria. As a reminder of the criteria history,
• when I started, there were four assessment criteria: context, creativity, quality and technical skills.
• during C&N these transformed into learning outcomes: LO1 technical; LO2 translate ideas into visual outcomes; LO3 critical understanding of contemporary practice; LO4 reflection.
• in May 2021 a new set of three was trailed: knowledge, understanding and application.

It took a while for this project to coalesce and it is still only in its early stages, nevertheless, enough material has been generated to make Assignment 4 an ‘interim report’ on its progress.

The project has stabilised as a comparison of the use and development of uniforms during my lifetime, starting with a children’s book from 1955, I-Spy People in Uniform. It looks at the beginning and end of that period but there is still work to be done and a methodology to develop for what uniforms have come and gone in the intervening decades between the 1950s and the 2020s and the uses of uniforms outside the constraints of the I-Spy books.

Covering the target subjects is a time-consuming process and will include seasonal events, such as Armistice Day when “dress uniforms” worn by all age groups abound.

I have developed a preference for photographing subjects from a distance, uniformed but in conversational groups rather than formally “on duty”.

This is my third course, and the third set of assessment criteria has just been trailed (OCA Quality Team, 2021). I (and, unanimously, the fellow students I have discussed them with) found the previous two versions confusingly diffuse and I am therefore an early adopter of the new scheme.

The text chosen for the project, although trivial, is of significant sentimental value as it echoes my childhood. It is also of considerable utility as the basis of a photographic project as it is (to me, at least) crying out to be part of a before-and-after, then-and now series. Thoughts about the passage of time are increasingly common as age advances and form the basis of both this and my final assignment for I&P. Such thoughts were first prompted by Bear & Albers’ Before-and-After Photography (2017), particularly Rebecca Self’s interview of Frank Gohlke (The Elusive Event, pp.79-98), an inverted before-and-after, where Gohlke photographed the effect of a tornado on his home town and its subsequent recovery. He states the importance of empathy with his subject, a natural inclination in this case as he was dealing with people he had known since childhood.

Although I sought a surveillance aesthetic, using a long lens at a distance for my photographs of conversations, I nevertheless tried to show the subjects sympathetically — until, that is, I chanced upon an extravagant wedding after finishing the photographs for submission: here my sympathy was with the homeless denied access to their usual daytime locations rather than the wedding participants in the grounds of St Martin-in-the-Fields (Blackburn, 2021b).

Turning to the new assessment criteria, the brief has been interpreted creatively and effectively. The text chosen offered a wide, though specific, range of relevant subject matter and that has been photographed with a coherent aesthetic approach. The brief states, “[b]e wary of illustrating your text with pictures and vice versa” (Boothroyd & Roberts, 2019, p.107) — it is possible to argue both ways whether I have complied with that.

The technical choices have been appropriate and deployed successfully. One image was manipulated as a composite (fig. C3, bus drivers). While I have retained the 6×7 / 7×6 format which, in my view (but not some of my tutors), enables a mix of horizontal and vertical images, this is somewhat compromised by the addition of the I-Spy images which in some cases exaggerates the difference. This could be ameliorated in a physical display by a considered placement.

The work as a response to the brief has been explained in personal terms and contextualised in the wider arena of some photographic practice and theory.

Coverage of the various purposes of uniforms is incomplete — there are uniforms of work and pastimes but the wedding photographs arrived too late and had no I-Spy equivalent, however such generalised coverage was not the purpose of this preliminary exercise.
For uniforms of belief, see Assignment 2 (Blackburn, 2021c). Uniforms of style, identity and (of particular interest) rebellion will be part of the project expansion.