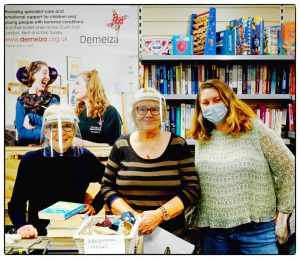 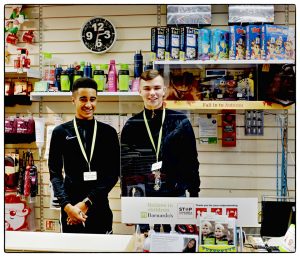 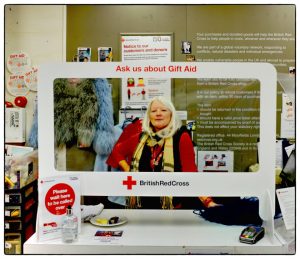 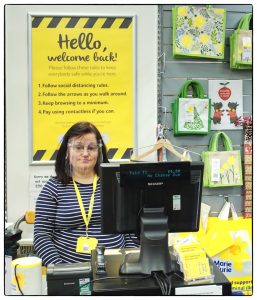 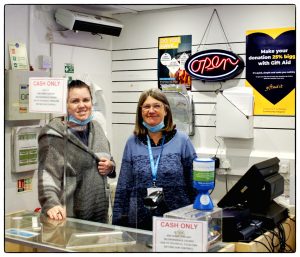 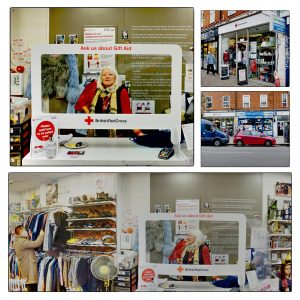 Reflection
[11Nov20] Max Kozloff (1994, pp.12-13) takes the view that historically, both formal and vernacular portraiture (the wedding, the graduation, the passport), were so stilted, uniform (in several senses) and formulaic as to overwhelm any personality exhibited by the subject. Then, in some later portraiture approaches, the subject is de-emphasised by concentrating on their surroundings or environment (for example Bill Brandt and Chauncey Hare) or subsumed in the photographer’s style or voice (Richard Avedon). Kozloff favours the then-current tendency towards informal portraiture, photographing the subject going about their everyday tasks, thus allowing them to be more relaxed (he cites the then-recently published books of portraits by Henri Cartier-Bresson, Lee Friedlander and Inge Morath †).

My portraits for the first assignment, volunteers in local charity shops, were situated in the subjects’ normal workplaces, but necessarily required their brief attention to the camera between serving customers. The new, added artificiality of Covid masks and plastic screens of varying transparency interfered with any rapport. Some, notably Susie, at the Red Cross, chose to ‘strike a pose’.

The brief was, for someone unused to photographing people, particularly strangers, a nicely-judged introduction to the course.
My idea for the project was practical, achievable and relevant, given the course’s concentration at that point on typologies.
I was surprised by how well it worked and how willing the subjects were to be photographed: my backup projects were not needed.

Implementation of the brief
The brief was, ‘to make five portraits of five different people from your local area who were previously unknown to you’ and that has been met successfully. The suggestion, ‘If it is at all possible, spend time with your subject, getting to know them and triggering a dialogue with them, prior to even showing them your camera’ was not possible to implement with Covid limitations in place (and as I write this, all the charity shops have been closed for the ‘second lockdown’).

I had alighted on my subject in July, while reading through the course extract available online at OCA. I did not receive the full course material until October and started photographing on 16th (Blackburn, 2020). On the 15th October I read the brief for the last exercise on the course, 5.3 which advises,

Remember to aim for consistency in your pictures. If you choose to photograph all the charity shops you’ve visited in a week, try to photograph them all using the same camera, lens, standing position, lighting, etc. This will help keep your project honed to the subject matter rather than you, the photographer.

This coincidence reinforced an early inclination to use a fixed focal length 35mm (equivalent) lens for the whole assignment and perhaps the whole course. For standard positioning, I intended to use the nearest edge of the shops’ service counters at the bottom of the frame (although this was often prevented by the displays) as this would allow enough in-focus background detail to provide identifiable context. The lighting was that available within the shops, which was very variable.

I photographed the shop exteriors too because I had noted in September the possibility of adding some additional context to the subjects by creating multiple image sets which concentrated on the portrait but also showed the exterior and perhaps a panorama showing the displays on either side of the till area. I am submitting the portraits as five individual images (two have been dropped, both of John, who doesn’t like to look at the camera, at British Heart Foundation and again a few days later, at Cancer Research) but have also included one of the multiple sets as an example (fig. 6).

Quality
The concept was an appropriate interpretation of the brief within the current constraints. The choice of subjects lends a degree of coherence to the series and the framing some consistency to the treatments.

Creativity
The project cannot be described a particularly imaginative but it makes good use of subjects available locally and satisfies the brief.

Technically
The images fulfil both the assignment brief and my stated intention. They are technically competent.

Context
In the course context, which at this stage concentrates on historic portraits and a typological approach, the images sit reasonably within the genre.

Æsthetically I am satisfied with the output. The enhanced series, showing additional aspects of each location would be worth pursuing if a large-scale physical display was used.
Morally / ethically / politically  the subjects participated willingly, stood behind protection screens and had the option of wearing masks: health risks were considered to be low. I only had the opportunity to show one print to the subjects, at Demelza, the first location and they were pleased with the outcome. One of the subjects (Billy at Barnardo’s) had been so excited, he photographed the image playback on my camera screen with his mobile.

† the books Kozloff mentions in this context are Henri Cartier-Bresson Photoportraits (1985), Lee Friedlander Portraits (1986) and Portraits: Photographs and Afterward by Inge Morath (1986).